JAH WOBBLE THE INVADERS OF THE HEART

Over the past four decades, Jah Wobble has ploughed his own furrow as a solo artist, as well as becoming a well-respected session musician, with a genuine passion for Eastern and Global music. He has worked with a diverse range of musicians, including Baaba Maal, Bjork, Primal Scream, Brian Eno, Sinead O’Connor, Julianne Regan, Dolores O’Riordan, Holgat Czukay, U2s The Edge, and Chaka Demus Pliers.

The man born John Wardle began his musical journey when he met John Lydon and Sid Vicious in 1973. It was Vicious who not only nicknamed John ‘Jah Wobble’ after a drunken binge but also loaned him his first bass guitar. Lydon asked JW to join Public Image Limited aka PiL in 1978. Wardle’s distinctive ‘low end’ bass became the backbone of PiL’s pioneering sound. After its follow-up, the exploratory yet sinister soundscapes of Metal Box, Wardle became disillusioned by politics within the band and their reluctance to play live. He eventually split from PiL in mid-1980 and embarked on a prolific solo career.

Jah Wobble and the Invaders of the Heart released their debut album in 1990 and received a Mercury Music Prize nomination in 1991 for the Rising above bedlam album. After the acclaimed Take me to God album in 1994 the band split and Jah Wobble launched his own 30 Hertz record label which has subsequently released more than 30 albums.

Jah Wobbles Invaders of the Heart

A true Maverick! Bass player, singer, composer, poet, and one-time London Tube driver, over a 36-year career in music John Wardle AKA Jah Wobble has carved a reputation as “a true maverick” (The Guardian), “wildly eclectic” (Uncut), and one of the finest musicians the UK has every produced.

The man born John Wardle began his musical journey when he met Sex Pistols John Lydon and Sid Vicious at Kingsway College, London, in 1973. John was not only nicknamed ‘Jah Wobble’ by Vicious after a drunken night out but Vicious also loaned him his first bass guitar and, following the Pistols’ split in 1978, Lydon asked Jah Wobble to join his new band Public Image Limited (aka PiL). They immediately scored a Top Ten hit with their debut single “Public Image”, and Wardle’s distinctive ‘low end’ bass was identified as the backbone of PiL’s pioneering sound, The Times later commenting that there is a “hypnotic power in his playing, a thudding, visceral bassline that dictates the way everybody else will play”. After PiL’s second album, 'Metal Box', Wardle became disillusioned by politics within the band and their reluctance to play live. He eventually split from PiL mid-1980 and embarked on a prolific solo career, his passion for Eastern and World music also inspiring a number of collaborations including Baaba Maal, Bjork, Primal Scream, Brian Eno, Sinead O’Connor, Julianne Regan, Dolores O’Riordan, Holgat Czukay (Can), The Edge and Chaka Demus & Pliers.

In 1986, after a long battle with alcohol, Wardle unexpectedly walked away from the music scene to work for London Transport, but eventually returned with a revitalized line-up of his band Invaders Of The Heart. By the 1990s, Wardle finally achieved public acceptance, including chart success and a Mercury Music Prize nomination for the album Rising Above Bedlam (Island Records). However, after releasing the top 40 album, Take Me To God and Heaven And Earth (also on Island Records), Wardle returned to making more experimental records. In 1997, he started up his own independent record label, 30 Hertz Records, a set-up which has so far resulted in well over 30 albums. In 2004, he signed to legendary reggae label Trojan Records, resulting in the best-selling box set, I Could Have Been A Contender, and two studio albums, Mu and Heart And Soul. In 2011, Wobble signed with Cherry Red Records for two collaborative albums – Psychic Life with Julie Campbell (aka LoneLady) and Ying And Yang with his old PiL bandmate Keith Levene.

In May 2015, Jah Wobble celebrates this illustrious, 36-year career in music with an ambitious 6-CD box set entitled ReDux. It’s a multi-faceted project, disc 6 comprises a brand new album of exclusive cover versions, which will also appear on a limited vinyl LP, and each of the other discs is themed, concentrating on Wobble’s explorations into Dub/World music, Ambient/Spoken word and Jazz, with another disc given over to his pioneering and eclectic post-punk work, during and after his tenure with Public Image Limited. Plus there’s a brand new single in there, coupling ‘Merry Go Round’ with ‘Let’s Go Psycho’, issued in April (with a video for ‘Merry Go Round’ in the pipeline).

Wardle is now a dedicated family man with a documented interest in spirituality - he received a BA in Music and Philosophy in 2001 - and, until 2009, he wrote regular book reviews for the Independent On Sunday, since then writing book reviews for The Times newspaper. He has also published a best-selling autobiography, Memoirs Of A Geezer, made yet more records - including Japanese Dub and a Jah Wobble and the Modern Jazz Ensemble album and published Odds&Sods&Epilogues, a book of poetry set to music that contains a CD.

ReDux complements JW’s earlier triple-disc compendium, the best-selling I Could Have Been A Contender, by offering twice as much music as its predecessor without significant duplication, while also catching up on over a decade’s worth of music issued since the release of …Contender on Trojan Records back in 2003. That’s 93 tracks in total featuring such heavy friends on guest vocals as Sinead O’Connor, Julianne Regan, Ronnie Drew (The Dubliners), Dolores O’Riorden, Julie Campbell (LoneLady), Natacha Atlas and Chaka Demus & Pliers. 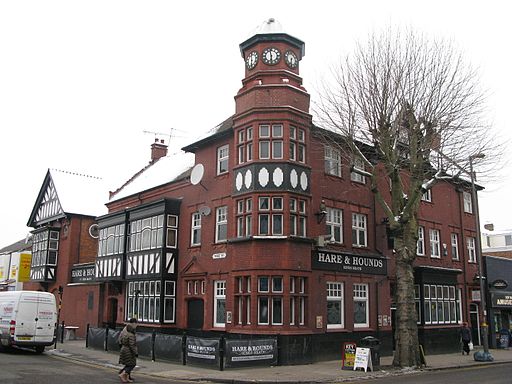 Situated in the South Birmingham suburb of Kings Heath, the Hare and Hounds has been around since 1820, but has stood in its present form since 1907. This, along with the beautiful and unique Art Nouveau tiles that line the entry hall and staircase, is a major contributing factor to its current Grade II listed status.

Although playing host to local Birmingham legends UB4O’s first ever gig in 1979 (recently commemorated by a PRS Music Heritage award and plaque), it is only in the past 7 years that it’s really established itself as one of the most important and influential music venues in the country, playing a vital part in nurturing the city’s vibrant music and creative community.