I started noticing social media blowing up about local band The Bad Flowers last week and wondered where the surge of excitement was coming from.

I was enthralled to see that they were being promoted by the same PR company that boasts clients such as Black Country Communion, Glenn Hughes, Joe Bonamassa and Bad Touch to name but a few.

Certainly, The Bad Flowers, are a band on the up, and that means new music, new shows and hopefully big things!

So without further ado; here's their latest single, taken from their upcoming debut album Starting Gun, this is Thunder Child. The Bad Flowers formed from the depths of the Black Country in 2014 comprised of lead vocalist and guitarist Tom Leighton, whose signature riffs, fuzz emotive guitar and pure vocals have a distinctive sound unlike anybody else. Bassist Dale Tonks provides a deep and heavy groove and tasty bass runs that underpins Karl Selickis' chest pumping drums and impecable rhytmic feel.

The combination of these three formidable players makes The Bad Flowers a force to be reckoned with, forging a sound steeped in the raw, passionate energy of the Black Country's 70's heroes, but, at the same time, keeping the vibe very much in tune with the 21st century rock sensibilities.

I remember playing with these guys at the O2 Academy 3 back in 2014, and even back at the start of their musical adventure the band were on fire it's great to see that the industry is starting to take notice of a fine band of musicians from the Black Country.

The guys in the band are as humble as they come and real down to earth fellas, I'm positive that they're heading in the right direction, and if the release of Thunder Child is anything to go by, they're just getting started.

The highly anticipated debut album, titled Starting Gun, is set for release in early 2018, and I can't wait.

To buy the single Thunder Child head to itunes 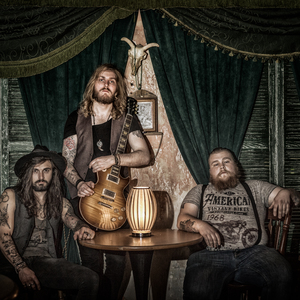